The Hurricanes have opted for continuity with the selection of the 2019 squad for the Investec Super Rugby competition.

As well as the players new to the squad, former Hurricanes utility back James Marshall returns to New Zealand rugby after playing in the United Kingdom and Japan while Bay of Plenty halfback Richard Judd is named in the squad after he made his debut in 2018 when he was called in as injury cover.

There are 12 players named in the squad who were part of the All Blacks 2018 campaign while four players – Beauden Barrett, TJ Perenara, Jeff To’omaga-Allen and Dane Coles – are centurions of the Hurricanes club.

Plumtree was excited about the squad the coaching group had assembled.

Of the 38 players selected, 34 have Super Rugby experience.

“A lot of the boys have been together for a long period of time but on the same side we also have some exciting youngsters that we have brought in,” he said.

“We’ve brought some guys in for development but we’ve got others who we think are good to go.”

Hurricanes captain Dane Coles believed the squad had the depth to deal with the demands of the competition.

“We want our players to have a real world class work ethic, we think that’s pretty important and I think our leadership group can really drive that. We’re really keen to welcome in some new guys and we will be looking forward to getting to know them.”

Plumtree said the season’s goal was to make the Super Rugby finals as they had done in the previous four years he had been assistant coach.

“We know how important it is to get a home quarter-final and semi-final in terms of winning this competition but of course there is a lot of work to do before you get there. It’s a really tough competition, there is no June break this year so we are going to have to play consistently well over a longer period of time.”

“We are going to have to use the squad and make sure everyone is fresh and keen and energised for every week. Our standards are very high and our expectations internally are high too. But we want to impress our fans and we want to keep growing the history of this jersey.”

The squad, minus the All Blacks and Maori All Blacks, will assemble on November 29. 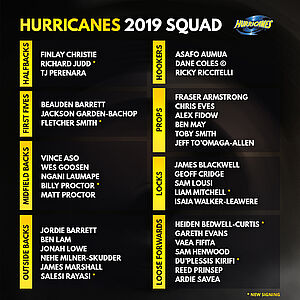 Becoming a Hurricanes member is stacked with benefits

As well as joining thousands of other passionate Hurricanes members who receive exclusive benefits, you will be among the first to hear the latest...

The Hurricanes are delighted to announce the signing of Brayden Iose through until 2022.

Born and bred in Manawatu, the 22-year-old was earmarked as...