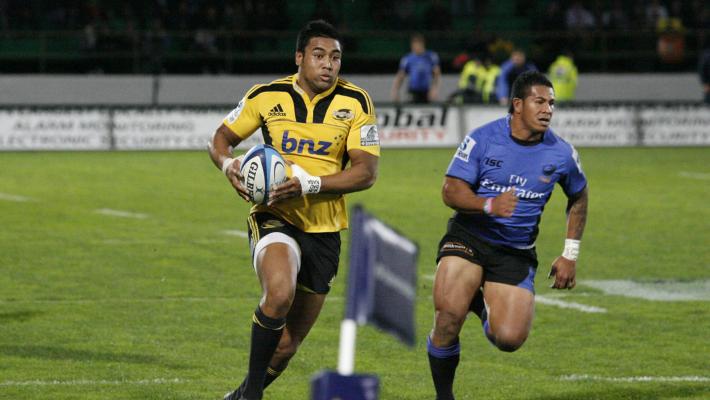 Win in Perth makes it 3 from 3

The Hurricanes earned a 42-13 win over the Western Force in Perth on Friday night, securing their third straight win of 2015 and their first bonus point win of the season.

The Hurricanes out-scored the Force five tries to one, as part of a committed, dominant, all-round team performance.

Physicality and cohesion in the forwards and power out wide saw the Hurricanes out score the Force two tries to nil in the first half and pull clear with 20 consecutive points after halftime, to inflict the heaviest ever home defeat on the Force in their 10th year of playing in the Investec Super Rugby competition.

The Hurricanes now head home and have their bye round next weekend, before hosting the Blues in Palmerston North on March 13.

The Hurricanes attacked the Force's traditional strengths around the rucks and dominated at set-piece time, whilst continuing the pattern of their organised, structured defence of the opening two weekends in South Africa.

This was extended with second half tries to No. 8 Victor Vito, left wing Julian Savea and fullback James Marshall, who scored right on fulltime after the Force had scored a late consolation try.

Force flyhalf Zack Holmes landed an early penalty and the home side had led 3-0 early.

The Hurricanes made their first promising raid when Barrett fielded a Force clearing kick, running fullback Marshall into space up the touchline into the 22 and nearly sending left wing Savea over in the corner from a subsequent ruck.

The first try wasn't long coming, however, with the Hurricanes securing a long-range turnover and Savea running it back deep into Force territory. The Hurricanes stretched the Force from the next phase and blindside flanker Brad Shields presented Jane with the final pass.

Barrett broke the advantage line on his own side of halfway, chipped, chased and followed up. The Hurricanes poured through and won another attacking scrum feed, but once again the home side held on by a thread.

The Hurricanes forwards engineered their second try on 25 minutes, picking and driving through the middle of the ruck and lock Abbott crashing over. Barrett's conversion pushed them ahead 12-3.

Concerted attack turned to stiff defence for the Hurricanes as the Force launched a series of lineout drives in the corner only to be pushed back. The Hurricanes re-asserted field possession and Barrett kicked a penalty to extend their lead.

On halftime, the Force made a big push to score a try but the Hurricanes averted their incursion with some committed close-quarter defence and all they could manage was a penalty to fullback Luke Burton.

Early second half continuity by the Hurricanes paid off, with Barrett kicking a well-struck penalty to extend their lead to 18-6.

In reply, Force fullback Burton missed a penalty and then built several phases. The Hurricanes remained patient, won a lineout turnover and second five-eighth Ma'a Nonu put them back on the front foot with a stab kick into the corner.

The Hurricanes won another penalty and Barrett put them ahead 21-6 with 25 minutes to play.

The Hurricanes exerted more pressure on the Force's scrum under their own posts, leading to No. 8 Vito barging over under the posts and Barrett converting to push them ahead 28-6.

Julian Savea made a barn-storming run up the sideline after a break by replacement Nehe Milner-Skudder, beating several defenders, to score the Hurricanes' bonus point try. Marshall added the extras to extend the lead to 35-6

Savea thought he had scored a brace, running on to a Matt Proctor stab kick from a scrum. But he was deemed off-side.

The Hurricanes sealed victory on the hooter when Marshall darted at the line and slammed the ball down over the chalk.

The Hurricanes team that played the Force was: