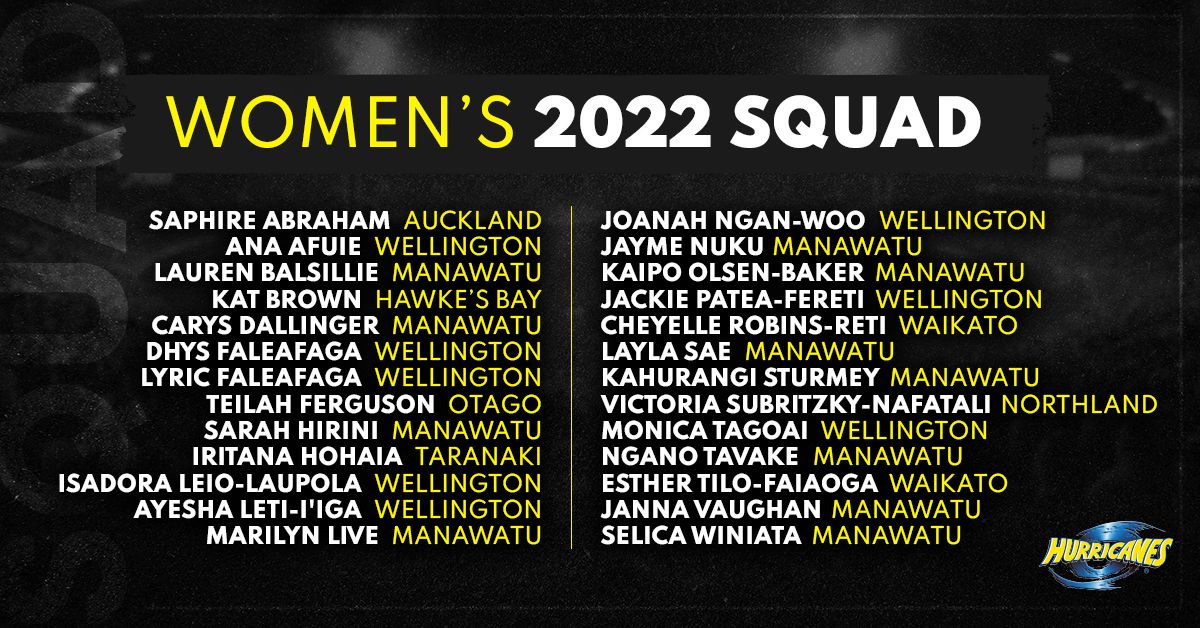 In a historic moment for the club, the Hurricanes has announced today its first-ever women’s squad to compete in the inaugural season of Super Rugby Aupiki.

With two final players to be announced in early December, the current contracted players include twelve past and present Black Fern and Black Fern Sevens players, including three Black Ferns from the 2017 World Cup winning side, as well as some exciting up and coming regional players. 20 players hail from the Hurricanes region.

“I am thrilled for the players mostly. For them to have the opportunity to play in the first ever Hurricanes Women’s Super Rugby team alongside the best players in the region is hugely exciting. It will be an opportunity to show their skills in a strong competition.”

Clarke has picked a squad packed with experience, talent, and pace.

“We have an exceptionally talented pool of players. I’ve been really excited about the young talent coming through, as well as the experienced players we have to lead them around the park."

“Everyone who’s been selected today deserves their spot. We have the right combination of players, many with lots of experience to draw on.”

“We have stayed local when selecting our squad. We hope that the fans and families in the region get behind these talented local players.”

One of the leading Sevens players in the world, Sarah Hirini has an impressive list of accolades to her name including captaining the Black Ferns Sevens team to a gold medal at the 2020 Tokyo Olympics, Sevens World Champion in 2013 and 2018, Commonwealth Games gold medallist, and six-time World Series winner.

Hurricanes CEO Avan Lee said that today’s announcement was a remarkable moment for the Hurricanes.

"Today is an incredibly significant day for women’s rugby and a historic moment for the Hurricanes."

"Founding a Hurricanes Women's team was a no brainer for us. It creates a level of rugby between the FPC and the Black Ferns, and ultimately gives some truly remarkable female players from our region a fantastic opportunity to compete in a super rugby environment."

"We're thrilled to welcome these players into our Hurricanes family."

Hurricanes Membership will be on sale in November which includes a Hurricanes Women’s home match.

The Hurricanes Women’s contracted squad is: