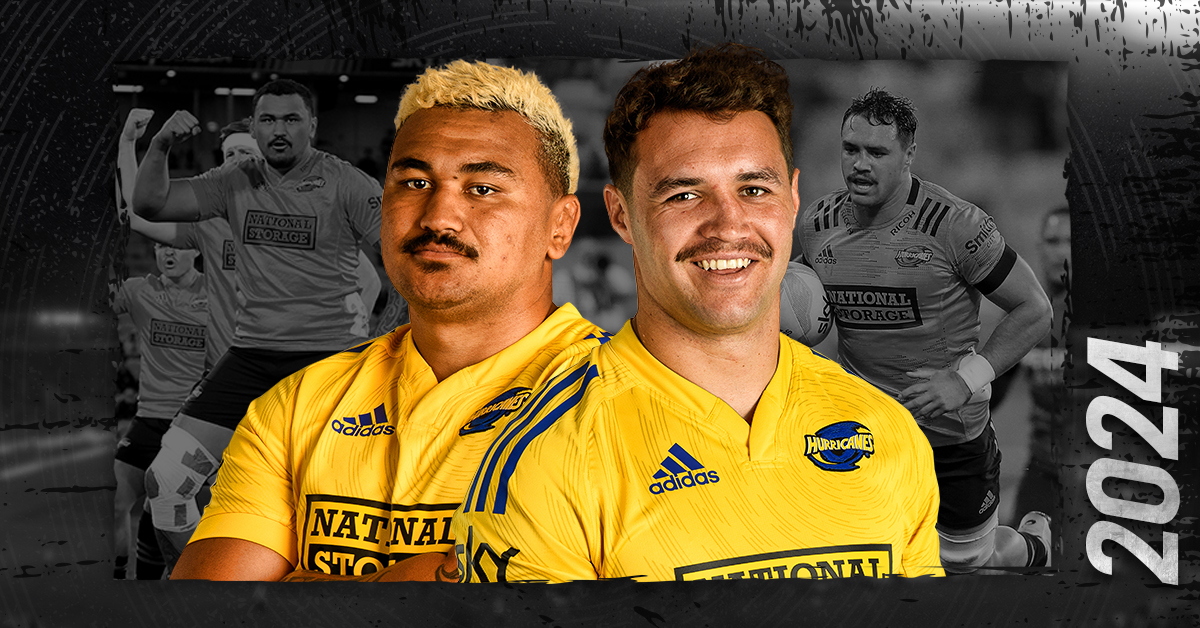 The Hurricanes today announced that Hawke’s Bay players, powerful lock Isaia Walker-Leawere and loosie Devan Flanders, have recommitted to the Club through 2024.

Flanders, 22, is a newer addition to Super Rugby, having debuted against the Stormers in Cape Town in 2020, whilst 25-year-old Walker-Leawere came onto the Hurricanes scene in 2018 when he made his debut against the Brumbies in Canberra.

A physically imposing lock with great athleticism, Walker-Leawere’s game has developed in all areas since his move to Wellington in 2016.

And all despite “a few niggles on the injury front,” said Hurricanes Head Coach Jason Holland.

“Izzy is a big man who has recovered well from a serious shoulder injury. He is strong at set piece and is a dominant ball carrier with good skills,” said Holland.

Educated at Gisborne High School, Walker-Leawere was a key member of the New Zealand Under 20s team that won the World Championship in Georgia in 2017.

In 2018 Walker-Leawere became the [then] youngest player to join the Hurricanes squad at just 19 years old. He has since played 43 matches for the side. The same year he signed to the Hurricanes, Walker-Leawere made his Māori All Blacks debut against the USA, scoring two tries.

“I’m thrilled to be continuing my time with the Hurricanes. I love the way our team is building on the experience of the last few seasons, and it’s great to see some of the young guys coming through, bringing some fresh perspective to the team, which changes the dynamic,” said Walker-Leawere.

From a rugby mad family in Hastings, Devan Flanders first represented Havelock North Rugby Club at the tender age of four, though it wasn’t until high school that Flanders really made a name for himself.

He was a pivotal part of helping Hastings Boy’s High to its first ever national title in 2017 and drafted into the Hurricanes Under-18’s squad.

He then went on to play in the New Zealand Secondary Schools team and received the Jerry Collins Memorial Bronze Boot for most valuable player.

Flanders played for the Magpies before receiving his first professional contract with the Hurricanes for the 2020 season.

“It was always a dream of mine to play for the Hurricanes – that first contract in 2020 was a big deal then, and it’s still a big deal for me now, “Flanders says.

“I’m excited and grateful for the opportunity to keep playing with the swirl on my chest. I have enjoyed every moment so far, and I know I’ve got more to offer.”

Holland, who followed Flanders closely since his days at Hastings Boy High School, said that it’s been a pleasure to see him grow and adapt as an athlete over the past three seasons.

“Devan is a brilliant athlete who has all the skills to be a complete number 8 We look forward to him working hard to nail down a spot in our loose forwards,” said Holland.

“He has the good skill and ability and has the character and work ethic to get to the highest levels of the game. He’s great rugby talent, but he's also a quality young man who is driven and prepared to work hard for himself and the Hurricanes family.”

“Devan and Izzy are both players with massive potential. They have been in the Hurricanes for a couple of years now and are in great space to fulfil that potential in the next few years.”

Since their respective debuts, Flanders has made 29 appearances for the Hurricanes, while Walker-Leawere sits at 43 after making regular appearances in the 2022 season.