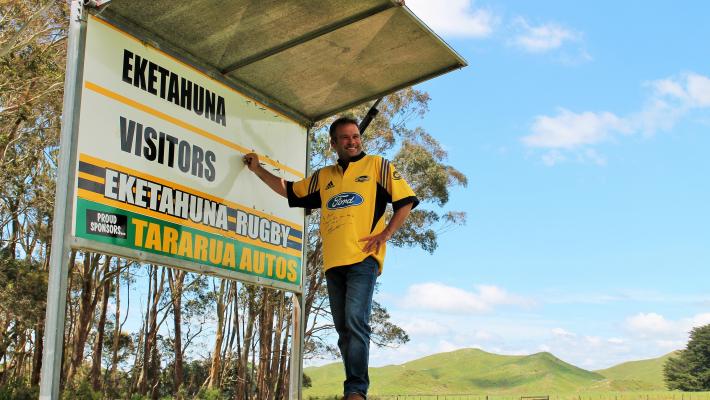 Eketahuna getting in the spirit

The ground work is almost done, the seating has been arranged and supporters' flags are flying high ahead of this month's pre-season Super Rugby clash between the Hurricanes and Crusaders in Eketahuna.

The game being held on Saturday, January 31st 2015 at the Eketahuna Rugby Club will see the rural township (population 440) swell with 4000 rugby fans donned in their regional colours says Nick Rogers, DB's Commercial and Marketing Manager.

"We've sold 80 percent of the tickets for this fantastic Super Rugby clash already which shows just how passionate Crusaders and Hurricanes fans are," says Mr Rogers. "The last time these two teams met in Mangatainoka it was all go with the Crusaders coming away with a great win. It'll be anyone's guess who takes the victory this time round but what is certain is how exciting the game will be."

With all Corporate tickets for the game sold and only 400 general admission tickets left, Mr Rogers encourages fans to get in fast and snap up the final tickets before they sell out.

Dennis "Doc" Dougherty, President of the Eketahuna Rugby Club, which celebrated its 125th anniversary in 2014, has been overwhelmed but not surprised by the community support for the game. He says a team of local club members is working tirelessly to get the pitch and the surrounding grounds in top order to host some of the country's leading rugby players.

"The Christmas trees came down and the Hurricanes flags went up," says Dougherty. "Since New Year it's been all go and we've got a great crew of enthusiastic people making sure the place is in top order to welcome the Crusaders and Hurricanes and their legions of fans. After talking to a few people in town, I think everyone who lives in Eketahuna will be at the game. It's brilliant for the town."

Hurricanes CEO James Te Puni and his team are equally excited about the game.

"It's hard to believe we're nearing our first game already, but this is a match all of the Hurricanes crew are looking forward to playing and attending. It will be a great way to finish our week-long preseason camp in Gisborne, and a good test for the players to put into practice everything they've worked hard for over the last two months."

"We know Eketahuna will put on a good show as hosts, and both the Hurricanes and the Crusaders are looking forward to responding to that with a fantastic Super Rugby display."

This month's game follows the four previous sold out pre-season games involving the Hurricanes franchise - three of which have been played at Mangatainoka, next to Tui Brewery, and the 2014 game played at Memorial Park in Masterton.

Mr Rogers, who has championed all four games to date, says their success comes down to providing heartland rugby fans with a family friendly and memorable day of footie in their own back yard.

Like previous years January's game will see pre and post game entertainment as well as an array of guest speakers while passionate fans are expected to turn out in their regional colours or colourful costumes.

GA tickets for the Super Rugby pre-season game are still available through PGG Wrightson Stores and through Tui HQ, SH2, Mangatainoka. Prices are $40.