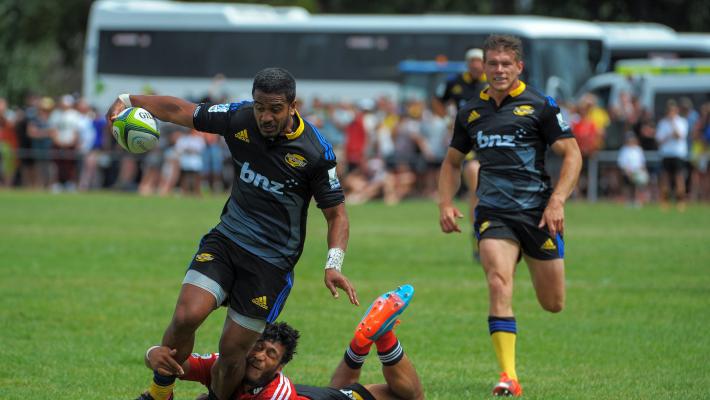 Canes off to winning start

The Hurricanes earned a superb defence-orientated 22-8 victory over the Lions in Johannesburg to open their 2015 Investec Super Rugby season on Saturday morning (NZT).

Patience and commitment for the full 80 minutes of the contest won the day for the Hurricanes, collecting their first season opening win of the competition since 2010.

Under pressure throughout much of the match, forced to make 71 tackles to the Lions' 10 in the first half alone and often on the back foot at scrum time, the win was perhaps best summed up with the very last play of the game when the Hurricanes won a tighthead scrum win on the Lions' goal-line and halfback TJ Perenara flicked a pass to replacement wing Matt Proctor who scored the match-sealing try.

Previously, two Beauden Barrett penalties was the only scoring of the second half, as the Hurricanes led 17-8 with time almost up.

For the Hurricanes, a number of players had busy games, openside flanker Ardie Savea, second five-eighth Rey Lee-Lo - judged Player of the Match - and halfback-first five-eighth combination Perenara and Barrett among them.

The Hurricanes soaked up all sorts of pressure from the home side throughout the first half, but they led 11-8 at the turnaround.

The story of the opening 20 minutes was missed opportunities from the home side.

The Lions enjoyed overwhelming territory and possession from the get-go, but first five-eighth and 2014 goal-kicking ace Marnitz Boshoff missed three penalties in the opening quarter and the Lions should've scored at least one try in this period as well.

Boshoff opened his season with two consecutive penalty misses, before fullback Andries Coetzee brilliantly regathered his own chip and chase to set up the game's first clear try-scoring chance but the Hurricanes held on. Winning a series of penalties, the Lions kicked for the corner and drove for tries but came up short and the Hurricanes cleared.

Instead, the Hurricanes struck, first five-eighth Beauden Barrett kicking a penalty to put them ahead 3-0 with a quarter of the game played.

The Lions attacked with ball in hand through 10 phases, right wing Ruan Combrinck latching on to a pass by No. 8 and captain Warren Whitely and crossing in the corner. Temporary replacement flyhalf Elton Jantjes missed another kick for the home side and it remained 5-3.

Barrett then kicked his second penalty to push the Hurricanes back in front. This penalty was Barrett's 600th point in Super Rugby, becoming the 17th player in the history of Super Rugby to reach the milestone.

The Hurricanes ran in a decisive try just before the interval to take a 11-5 lead into halftime.

The try was started from a penalty and clean lineout take by lock Mark Abbott. The backs worked the ball across field to fullback Jason Woodward, who made a powerful burst and offloaded a pass on his inside to halfback TJ Perenara who flew through to score.

The home side clawed three points back just before the interval, Boshoff kicking his first penalty of the night.

The opening period of the second half was a messy affair, both sides searching for a spark.

The Hurricanes put pressure on the Lions' lineout, and It was them who struck the first blow, Barrett successful with his second penalty and pushing their lead out to 14-8.

Handling errors hurt the Lions as the game opened up. Barrett kicked his second penalty of the second half with five minutes to play, extending the lead to 17-8.

The Hurricanes saved their best period of attack until last, almost breaking through to score in open play, before crossing with the last act of the match to seal the four competition points.

The Hurricanes meet the Bulls in Pretoria in their second competition match next Saturday morning (NZT).

The Huricanes team was: