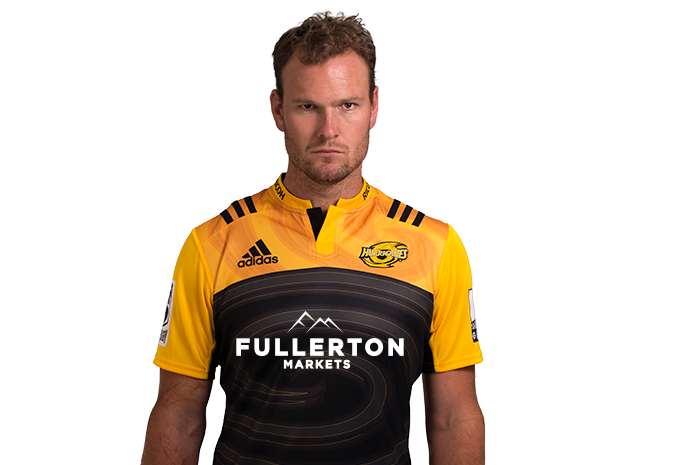 Hard-working lock and specialist set piece exponent James Broadhurst became a valuable member of any side he represented, renowned for his high workrate, athleticism and experience.

Broadhurst played his first Super Rugby season in 2010 after previously being a member of the Crusaders Wider Training Group.

Prior to 2010 he spent four years in Canterbury, but returned to the Hurricanes region where he attended secondary school in Gisborne and represented Poverty Bay Secondary Schools. He grew up in Northland and as represented New Zealand at U19 and U21 levels.

He was a key cog in Canterbury's back-to-back Air New Zealand Cup title wins in 2009, but in early 2010 announced his shift to Taranaki, helping the amber and blacks win the ITM Cup in 2014.

In July 2013, Broadhurst announced he had re-signed with the Hurricanes for a further two years through to the end of 2015.

His form only improved to the point he was selected in the All Blacks and made his test debut against South Africa in 2015 before a serious concussion ended his career prematurely.

Band
Bob Marley
Movie
District 9
Holiday Destination
Matai Bay
Sport Team or Individual
Chicago Cubs
Hobbies
Fishing
Pets
Boxer
If you weren't a professional rugby player, what would you be?
Fisherman
What's on the top of your bucket list?
Catch a Marlin
If you could invite any three people to a dinner party, who would they be and why?
Will Ferrell, Dane Coles, Mike Tyson
Your biggest fear is
Heights
What's your most embarrassing moment?
Getting down-troued on the school bus when i was six. I was mentally scarred
If you could live a day in anyone else's shoes, who would it be?
Kelly Slater
If you could have one super power, what would it be? Why?
To fly

Earliest Rugby Memory
Playing in the sand
Position When Younger
First Five-eighth
Most Admired Rugby Player
Norm Maxwell
Biggest Rugby Influence
My parents
Most Memorable Rugby Moment
All Black debut
Worst Rugby Room Mate
Dane Coles
Why did you start playing rugby?
My older brother started so I wanted to play as well
Best thing about being a professional rugby player
Friendship
Best piece of advice you have been given (Rugby or Personal)
Hard work pays off
What would you say to someone who one day wanted to be a Hurricane?
Work hard and always set achievable goals