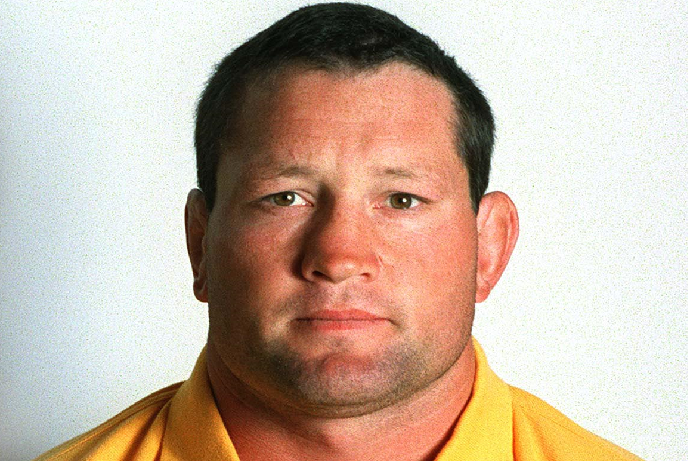 Gordon Slater and his elder brother Andy achieved considerable folk hero status even beyond their native Taranaki in the early years of professionalism in the late 1990s to early 2000s. Against the onslaught of commercialism and the many changes that brought both Slaters remained true to many of the game's traditional values.

When others, having suffered a selection knockback, rushed off to accept overseas contracts the Slaters were content to stay home, working on the family dairy farm in among their rugby preparation. Both continued as stalwarts of the New Plymouth Old Boys club and even after major matches promptly returned to the milking shed to service their herds.

Most of Andy's long career was restricted to playing 180 matches for Taranaki at NPC levels. But Gordon, a strong and ruggedly built tighthead prop, achieved several national honours at various levels though his time as an All Black was limited.

Though never the most spectacular and mobile of players, Gordon Slater, with his size and scrummaging power, impressed as a candidate for the higher echelons from the time he made his debut for Taranaki as a 19-year old in 1991.

At the end of the 1995 season, though, Slater suffered a huge setback when in the NPC second division semifinal against Bay of Plenty he broke a leg. The injury was so severe he missed all of Taranaki's 1996 season, including the celebrated Ranfurly Shield win over Auckland at Eden Park.

He also was ruled out of the first season of Super 12 and apart from an appearance as a replacement in 1997 he did not become a regular for the Hurricanes until the 1998 season.

Over the next five seasons, in a team not noted for consistency, Slater became one of the Hurricanes' most steadfast performers, making 55 Super 12 appearances and often being the captain. Slater also returned to the Taranaki side in 1997, and was in the side which made the NPC semifinals in 1997 and in 2000.

His first season back from injury in 1997 saw his honesty rewarded at last with inclusion in the All Black side for the tour of Wales, Ireland and England. Olo Brown was then firmly established as the test tighthead prop and Slater was limited to just three midweek appearances, as a replacement against Wales A and starting against Emerging England and England A.

Taranaki's second appearance in an NPC semifinal saw him recalled to the All Blacks for the 2000 tour of France and Italy and he appeared as a replacement or substitute in each of the three internationals, scoring a try in the second test against France. He was a member of the All Black squad for the 2001 tri-nations and domestic tests but did not take the field.

Slater, having played in 144 matches for Taranaki and with nearly 220 first class games to his credit, bowed out of top rugby at the end of the 2002 season.

Profile by Nick Rutherford for the New Zealand Rugby Museum