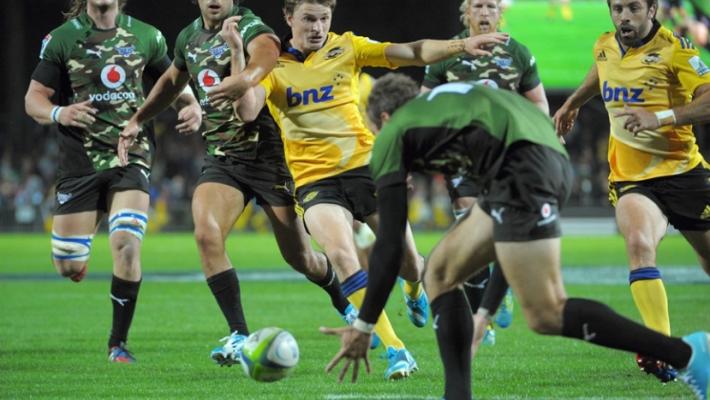 The Hurricanes are chasing more valuable competition points when they face the Bulls in their second round Investec Super Rugby match at 6.10am this Saturday morning.

Their 22-8 win over the Lions was their first win to start the season since 2010, while the last time the Hurricanes won two consecutive matches in South Africa was in 2006 - the year they reached the final.

Victory over the Lions was built on patience and resilient defence, the Hurricanes surviving on a minority of possession to outscore their opposition two tries to one.

In contrast, the Bulls failed to fire in their opening 17-29 loss to the Stormers which was their first Super Rugby defeat at home since dipping out to the Brumbies in their 2013 home semi-final. The Bulls were mistake-ridden against the Stormers. They were harried in the lineouts and their normally rock-solid scrum went backwards.

Super Rugby champions in 2007, 2009 and 2010, the Bulls will be eager to get on the front foot and beat the Hurricanes to register their first win of the season.

Renowned for their tough forwards and 10-man rugby style of play, the Bulls scored the fewest tries (28) of any team in 2014, winning seven of their 16 fixtures and finishing ninth.

Headed by veteran, 121-test lock Victor Matfield and young-gun first five-eighth Handre Pollard, the Bulls this year possess typical power and experience in their pack and exuberance in their backs.

Matfield leads a tight-five in 2015 containing current number one Springbok hooker Adrian Strauss and international prop Trevor Nyakane, both former Cheetahs players. Returning from injury, No. 8 Pierre Spies is strong and rugged, while specialist openside flanker Lappies Labuschagne has also moved to the Bulls from the Cheetahs this year.

Pollard is the South African U20 flyhalf who went on to make his Springboks debut in 2014. If they use their backs, their second five-centre combination of Jan Serfontein and JJ Engelbrecht will be dangerous on attack and wing Bjorn Basson has express pace.

The Hurricanes could have a welcome dilemma in their midfield. Rey Lee-Lo was the Player of the Match against the Lions, while All Blacks second five-eighth Ma'a Nonu is expected to be available for selection to make his 145th Super Rugby appearance and first for the Hurricanes since 2011.

Last year, the Hurricanes beat the Bulls 25-20 in Napier, with first five-eighth Beauden Barrett kicking six penalties including the winning kick late in the contest.

In 2013, the Bulls won 48-14 in Pretoria, scoring two intercept tries and two more directly through forward drives. Prior to that in Pretoria, in 2010, the Bulls came back from a 0-12 deficit to beat the Hurricanes 19-18.

The Hurricanes team will be named on Wednesday evening.