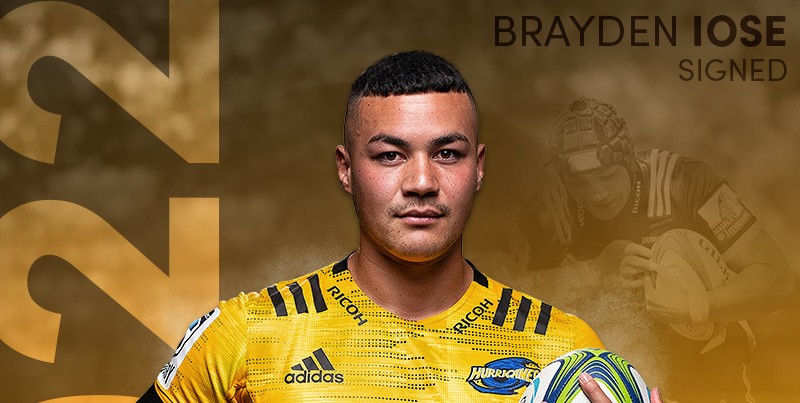 The Hurricanes are delighted to announce the signing of Brayden Iose through until 2022.

Born and bred in Manawatu, the 22-year-old was earmarked as a future star of the game whilst representing Palmerston North Boys’ High School.

Iose’s talents have led him down a path which allowed him to gain experience in the Hurricanes U18s, U20s and the Hunters.

In 2018, he was included in the Hurricanes’ wider squad on a development contract and was rewarded with game time during the Brisbane Global 10s which took place in the Super Rugby pre-season. Unfortunately, injury struck.

“It has been a bumpy few year years to be fair. I played 3 games in 2018 due to a hip injury and in 2019 I missed a large portion of the season due to a knee injury. It was a tough time mentally, but I feel I have grown a lot and learnt a lot about myself during those times.”

Throughout the latter half of this year, Iose headed back to Manawatu for the Mitre 10 Cup season, but says he’s enthusiastic about getting himself back down to the capital.

“It’s crazy, all through school I looked up to these guys and now they’re my teammates. There are outstanding loosies at the Hurricanes and I’m really excited to learn off them and grow my game by working alongside them.”

He wants 2021 to be all about taking his game to the next level.

“I want to develop my game as much as I can and put my best foot forward every week. I want to do everything I can to put the team in a position to win.”

“Brayden is an exciting young prospect who has come through the Hurricanes development pathway. He’s got good speed and power with a high skillset. He also has great character and I’m looking forward to watching him grow in our environment.”

Becoming a Hurricanes member is stacked with benefits

As well as joining thousands of other passionate Hurricanes members who receive exclusive benefits, you will be among the first to hear the latest...

The Hurricanes are welcoming news of a Trans-Tasman Super Rugby competition set to kick off in May 2021.