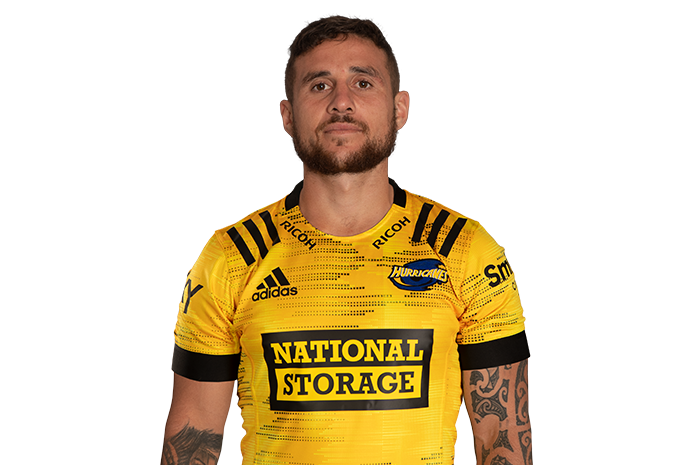 A LIVEWIRE halfback and extraordinary scavenger of the ball, the competitive Thomas “TJ” Perenara has been at the top of his game for close to a decade.

His potential was first spotted at Mana College in Wellington, when Perenara was part of the New Zealand Schools side in 2009 and 2010. Soon after he made his debut for the Wellington Lions. He won the 2011 Junior World Championship with New Zealand Under 20, alongside several of his All Blacks teammates.

Perenara has played 69 Tests for the All Blacks since making his debut in 2014.

He is the most-capped Hurricane of all time and has played 140 games since making his Super Rugby debut in 2012. He won a Rugby World Cup with the All Blacks in 2015 and a Super Rugby title with the Hurricanes in 2016.

He took a sabbatical in Japan in 2021 before returning to the All Blacks squad for the Bledisloe Cup and Rugby Championship and the Hurricanes upcoming Super Rugby season.

Perenara’s powerful pass and his attacking abilities – in particular, his ability to spot and take gaps in opposition defensive lines – are a key asset.

Song
Finest Wine
Band
Six60
Movie
Men of Honour
Holiday Destination
Bali
Food
Roast Chicken, lasagne
Sport Team or Individual
B.O.C. - Kobe Bryant
Wish
To be an All Black
Hobbies
Golf, Cricket, Diving
Pets
Two cats
If you weren't a professional rugby player, what would you be?
Property Investor
What's on the top of your bucket list?
to sky dive
If you could invite any three people to a dinner party, who would they be and why?
Tiger Woods, Michael Jordan, Beyonce.
Your biggest fear is
Falling
If you could live a day in anyone else's shoes, who would it be?
LeBron James

Earliest Rugby Memory
Rugby Training on Onepoto Park with Pop
Position When Younger
Halfback
Most Admired Rugby Player
James Marshall
Biggest Rugby Influence
Pop and Parents
Most Memorable Rugby Moment
U20 World Cup final - 2011
Worst Rugby Room Mate
Beauden Barrett
Why did you start playing rugby?
To hang with mates
Best thing about being a professional rugby player
Getting to do what I love day in day out
Best piece of advice you have been given (Rugby or Personal)
Never ever ever give up
What would you say to someone who one day wanted to be a Hurricane?
Set your dreams high. Hard work beats talent when talent doesn't work hard