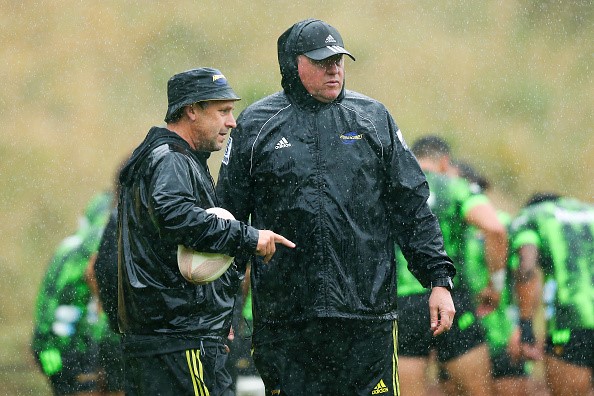 Head Coach Jason Holland and Assistant Coach Chris Gibbes have extended their contracts with the Hurricanes and New Zealand Rugby (NZR) through to the end of 2023.

Holland guided the Hurricanes to five Super Rugby Aotearoa wins in a row during his first season in charge after taking over for the 2020 season when predecessor John Plumtree joined the All Blacks coaching group.

Holland, who joined the Hurricanes coaching team in 2015, said he had thoroughly enjoyed his first season as Head Coach and was excited at the prospect of taking the playing group forward over the next two years.

“We have a quality group of people who like to be challenged and want to win. We played some excellent rugby through the second half of last season and proved we can beat anybody on our day and now the challenge is to make that a habit.

“I’m expecting big things in 2021 and beyond from this talented playing and coaching group. We have a great mix of experienced and younger athletes coming through the ranks and we also have some excellent additions to our management group who are making a big impact already.”

Gibbes, who joined the Hurricanes in 2020 following a successful tenure as Head Coach of the Wellington Lions, said he was looking forward to building on his first season in Super Rugby.

“The Hurricanes are an awesome organisation and team to work for and I’m just stoked that I’ve got another two years. I feel very privileged.

“Sky Super Rugby Aotearoa is a challenging competition to be involved in and that’s what I like, in fact it’s driving me harder than ever before. 'Alfie' [Holland] has a got a good leadership style and I like the vision he has for where the team can go. He knows what he wants and is really clear with that.”

Hurricanes CEO Avan Lee said: “'Alfie' [Holland] and 'Gibbo' [Gibbes] have formed an excellent relationship since they started coaching together at the Hurricanes. Both men are highly respected by players and staff and have already made a significant contribution to our organisation. We are delighted that they have chosen to extend their contracts until the end of 2023.”

“Jason and Chris are both quality coaches and people who have been successful in professional competitions both overseas and in New Zealand. We are really pleased they will continue to share their experience and knowledge in Sky Super Rugby Aotearoa for the next two years.”