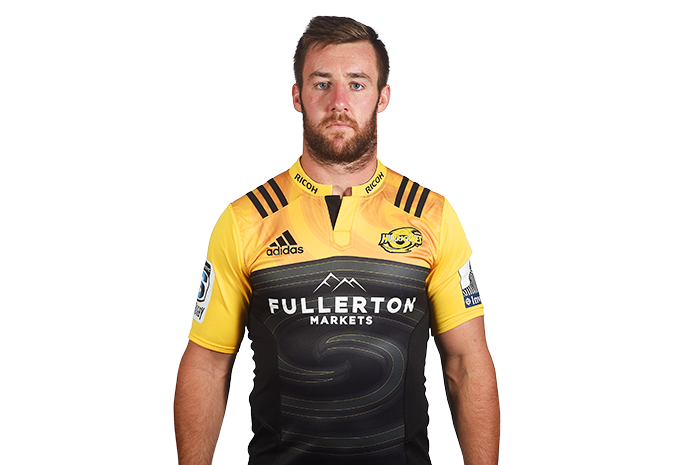 Hawke's Bay lock Mark Abbott made a real name for himself during the 2013 and 2014 ITM Cups.

Abbott arrived in Hawke's Bay for the 2013 season having only played representative rugby for the Canterbury Colts team. It was his work ethic, athletic ability and enthusiasm which landed him a Super Rugby contract for 2014, and again in 2015.

Abbott made his Super Rugby debut at lock in the first match of 2014 against the Sharks in Durban and made one other appearance against the Highlanders.

He played club rugby for Napier Old Boys Marist, often playing in the loose forwards as well as at lock.

Abbott established himself as a member of the Hurricanes starting XV in 2017 as a result of some stellar performances.

He made his last appearance for the Hurricanes in 2017.

CAPTION: Abbo runs in for one of his two tries against the Blues at Eden Park during the 2017 Investec Super Rugby season. PHOTO: Getty Sport

Song
Talk is Cheap - Chet Faker
Band
Fat Freddy's Drop
Movie
The Other Guys
Holiday Destination
Totaranui, Golden Bay
Food
Roast Lamb & Garlic Bread
Sport Team or Individual
Andre Agassi
Hobbies
Golf, fishing
If you weren't a professional rugby player, what would you be?
A traveller
What's on the top of your bucket list?
Climb Machu Picchu, walk the Great Wall of China
If you could invite any three people to a dinner party, who would they be and why?
Leonardo DiCaprio, The Big Show and Peyton Manning
Your biggest fear is
Mice or bees
What's your most embarrassing moment?
Lighting the Farm truck on fire as a 4-year-old
If you could live a day in anyone else's shoes, who would it be?
Jeb Corliss, the wingsuit guy
If you could have one super power, what would it be? Why?
To fly, so I could get places quicker

Earliest Rugby Memory
Under 5s for Darfield
Position When Younger
12
Most Admired Rugby Player
Josh Kronfeld
Most Memorable Rugby Moment
Winning the Ranfurly Shield
Worst Rugby Room Mate
Michael Allardice
Why did you start playing rugby?
Brothers were playing
Best thing about being a professional rugby player
The team environment
Best piece of advice you have been given (Rugby or Personal)
Make sure everything you do is moving you forward
What would you say to someone who one day wanted to be a Hurricane?
Work hard and never give up