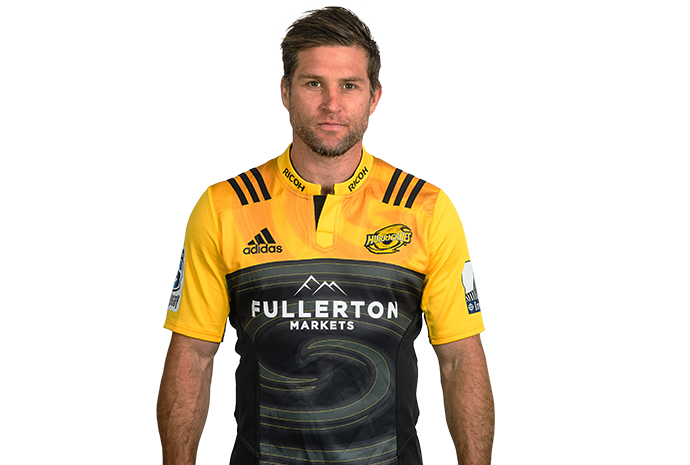 Cory Jane played his 50th Test in 2014, completing a solid comeback from a serious knee injury in 2013 that had forced him on to the sideline for nine months.

Previously, Jane's rise to being one of the world's premier wing three-quarters was complete by the time he collected his Rugby World Cup winner's medal in October 2011. Jane had an outstanding tournament, capped by a Player of the Match performance against Australia in the semi-final. An excellent finisher and rock-steady defender, Jane is also one of the best in the business under the high ball.

Jane fought back from adversity just to make the RWC squad after a lacklustre, injury hit Super Rugby season in 2011. But he returned to finish the campaign and played well for the All Blacks in the pre-RWC tests that followed and blossomed in the tournament.

Previously, prior to playing in all but one match in 2010, Jane had an outstanding 2009 Super 14 season, safe on defence - particularly under the high ball - and increasingly dynamic on attack. Quick on his feet, he also scored five tries in 2009, and helped set up the match winning try for Tamati Ellison to score in the corner in the Hurricanes' 28-27 win over the Force which catapulted them towards the semi-finals.

Jane duly made the All Blacks squad for the start of the 2009 international season in June and played on the right wing in the first Test against France, setting up a try for flanker Liam Messam with a kick and chase regather and scything run up the field in broken play. This also set up his international season and he went from strength to strength, ending the year as the All Blacks' first choice right wing and scoring a similar style try in the end of year Test against France with a fend, kick and chase and regather.

He returned just as strong and hungry in 2010, missing just one game at the back all season, against the Bulls in round six after taking a knock the previous week. Jane was re-selected in the All Blacks' Test squad at the end of May and added to his 12 Test caps over the winter and during the end of year tour.

Jane completed a whirlwind 2006 year when he was named the Wellington Player of the Year. An exciting attacking fullback or wing with speed to burn and a penchant for the tryline, Jane's rise continued in 2007 with an outstanding debut Super 14 season for the Hurricanes. Playing at fullback in all 13 matches, he was always dangerous and scored three tries and was directly involved in several more.

He sprang to prominence at the start of 2006 for the New Zealand Sevens team, making a popular hometown debut at the Wellington leg of the IRB Sevens in February. It got even hotter for the Heretaunga hare in March when he won a gold medal with the team at the Melbourne Commonwealth games in March, scoring the first try in the final against England.

More Sevens heaven came for Jane at the Hong Kong and Singapore tournaments, ahead of international fifteen-a-side selection with the New Zealand Maori, scoring a hat trick in the Maori team's win over the United States.

He played a full season for the Wellington Lions in the NPC, and was the top try scorer with six in 12 matches played. He backed that up in 2007 with a second impressive season for the Lions, and earned another twelve caps for the Hurricanes in 2008.

A Wellington age group representative in 2002 and 2003, Jane was first selected for Wellington in 2003 and played nine games as loan player for Hawke's Bay in 2004 before returning to the Lions.

In April 2007 Jane was crowned Upper Hutt Sportsman of the Year to go with his Wellington rugby award, and in May donned his third international jersey when he played for the Junior All Blacks in the IRB Pacific Nations tournament.

His steady rise was complete at the end of 2008 when he was selected for the All Blacks Spring tour off the back of another stunning ANZC, making his Test debut against Australia in Hong Kong.

Jane played his last match for the Hurricanes in 2017 after making 123 appearances.

Song
John Legend - Stay with you
Band
R Kelly
Movie
Predator
Holiday Destination
Upper Hutt
Food
McDonalds
Sport Team or Individual
Eddie George former NFL player
Wish
My kids to be healthy.
Hobbies
Sleeping
Pets
A monkey called Julz
If you weren't a professional rugby player, what would you be?
Actor
What's on the top of your bucket list?
To get rich
If you could invite any three people to a dinner party, who would they be and why?
Eddie George, Kate Beckinsale, Arnold Schwarzenegger.
Your biggest fear is
Spiders
What's your most embarrassing moment?
Getting knocked out by a rugby ball #falcon
If you could live a day in anyone else's shoes, who would it be?
Kevin Hart
If you could have one super power, what would it be? Why?
To be invisible

Earliest Rugby Memory
Playing in bare feet
Position When Younger
First Five Eighth
Most Admired Rugby Player
TJ Perenara AKA Hammer
Biggest Rugby Influence
Family
Most Memorable Rugby Moment
Winning the World Cup in 2011
Worst Rugby Room Mate
Anyone that snores aka Julian Savea
Why did you start playing rugby?
My dad made me
Best thing about being a professional rugby player
Kids telling me I''m their favourite player - and getting paid
Best piece of advice you have been given (Rugby or Personal)
To model my game around the great Upper Hutt fullback, Tony Ward
What would you say to someone who one day wanted to be a Hurricane?
If you want it, go get it. Don't let anyone tel you you can't