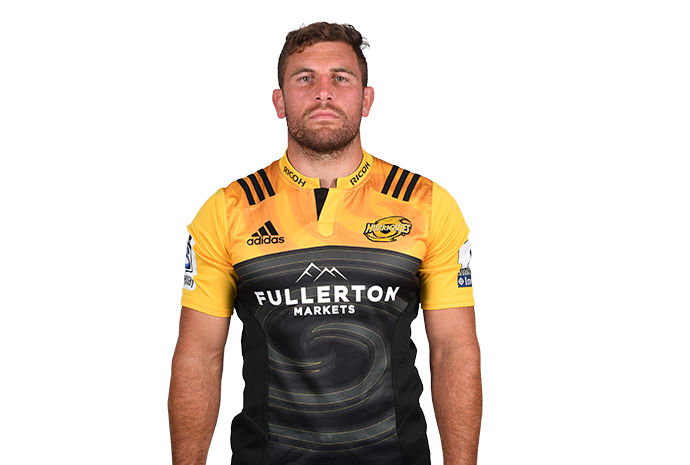 Gibbins cut his rugby teeth on the fields of Taranaki, before making an immediate impact for the Varsity Senior A side when he moved to Palmerston North in 2007 to study for a Bachelor of Sport and Exercise at Massey University.

After climbing the ranks and playing for Manawatu A, he made his debut for Manawatu Turbos against Wellington at the Westpac Stadium back in 2009 - a milestone he still remembers fondly.

With the wider training group now available for selection every week based on merit rather than having to wait for injuries, Gibbins will be hoping to make an impact this season to receive his first call up to the Canes.

CAPTION: Callum Gibbins dives over the line after a charge down to score the Hurricanes fifth try of the night against the Brumbies in round 9 of the 2017 Investec Super Rugby season. PHOTO: Getty Sport

Band
Fin Rah Zel
Movie
Step Brothers/Blood Diamond/Willow
Holiday Destination
Wai-iti Beach
Food
Coffee
Sport Team or Individual
Jamie Thomas
Hobbies
Music, outdoors
Pets
Cat - Narla
If you weren't a professional rugby player, what would you be?
In a band, travelling the world
What's on the top of your bucket list?
Bali surf trip
If you could invite any three people to a dinner party, who would they be and why?
Jack White, Jamie Thomas, Felix Baumgartner. I'd love to hear their stories from the road.
Your biggest fear is
Nana's smelly fridge
What's your most embarrassing moment?
Trying to read out loud in a lecture and not knowing how to pronounce big words.
If you could live a day in anyone else's shoes, who would it be?
Mick Fanning / Jamie Thomas

Earliest Rugby Memory
Playing with my brother in Inglewood
Position When Younger
12, 9
Most Admired Rugby Player
Shalk Burger
Most Memorable Rugby Moment
Winning the ITM Cup Championship final with the Turbos
Worst Rugby Room Mate
Nehe Milner-Skudder
Why did you start playing rugby?
For fun
Best thing about being a professional rugby player
Friends
Best piece of advice you have been given (Rugby or Personal)
Don't let the man get you down
What would you say to someone who one day wanted to be a Hurricane?
Start each day with a glass of fresh juice and a smile